I’m a little later than I would’ve liked in posting this, but I had an absolute blast at Anime Banzai and VOCAMERICA the weekend before last!

It was my first time in Utah, and my second time out West… other than attending Anime Expo back in 2014, I ‘d never traveled farther out than Arkansas! The area is absolutely GORGEOUS, I still can’t get over the mountains that surround Salt Lake City. They’re absolutely stunning. I wish I’d gotten the chance to take better photos, but this one will have to do.

My attendance was mostly thanks to Pandemic : doujin music collector extraordinaire and co-host of the Vocaloid Hangout Plug.dj room. I honestly can’t thank him enough for inviting me. I also was happy to have a third convention run-in with Agatechlo (resident LEON stan and Plug room manager) who gave us all nifty little LEON keychains, with art drawn by Untramen!

It hadn’t crossed my mind that Anime Banzai was the convention where Vocatone first debuted V3 Oliver years ago, so I certainly got a surprise when I ran into Chaofreak (now SCRAPxRABBiT), one of Vocatone’s former members. I was more familiar with him as voicer of Kurone Zanda, one of the first couple of overseas UTAU… EVER. It was a giant blast from the past to be able to meet him IRL, since he and Chii were basically the ones that brought UTAU to the US and outside of Japan in general. I had fun chatting with him and the rest of the Utah Vocaloid crowd, even unexpectedly meeting one of Lystrialle’s PV artists, Oxymoroff!

VOCAMERICA was fantastic, with a bunch of new songs added to the setlist (I’ll be linking the official Engloids.info writeup later!) Many thanks to Aki for including the special surprise of Aiko performing HIBIKASE, I’m extremely honored!!

All-in-all, this was easily one of my best convention experiences. I definitely hope to be back at Anime Banzai next year!

My next convention will be Yama-con in Pigeon Forge, TN from Dec 1st to 3rd, which will also feature a VOCAMERICA show! Hope to see y’all there! 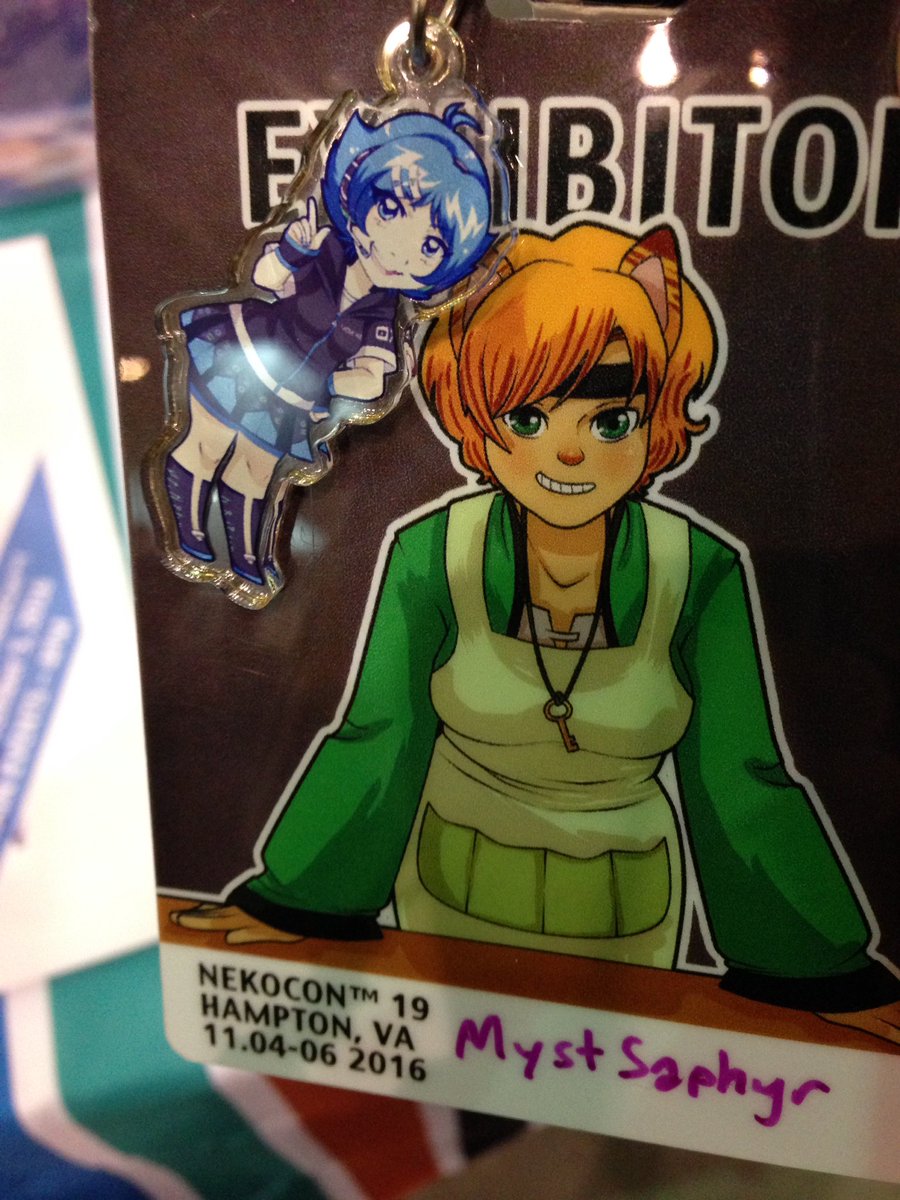 I arrived home from NekoCon yesterday early morning, but I was far too exhausted to properly recount anything about the weekend for a coherent blog post. It’s still difficult for me to put everything into words as the whole VOCAMERICA experience was actually overwhelming.

I cannot thank everyone enough for their support: Aki for including Aiko in the concert and allowing me to assist her at the exhibitor booth (which was a FANTASTIC experience), Agatechlo and KK and Iris and Joe and everyone else I met at the con for being such wonderful friends and supporters, and Pandemic for being there in spirit and surprising Aki with such a fun gift at the VIP hangout. I couldn’t have asked for a better NekoCon.

I unfortunately did not film the concert (for one, at that point my phone was nearly full anyway and I also wanted to fully experience the first VOCAMERICA performance) but videos have been cropping up on Twitter and YouTube already.

Shinji, the tech manager for the show, posted his videochat footage from Aki’s phone. Aki herself filmed the entire concert with a camera & tripod, so you can expect footage to be posted within the next few weeks, and even sooner if you were a Kickstarter backer.

Also RoboticReptile1 on Twitter captured footage of the 3 CrusherP songs in the concert: “Biohazard”, “Wildfire!!” and “ECHO”. I still can’t believe I got to see Aiko perform on stage and I’m not ashamed to say I cried like a proud mom.

The concert itself went off without a single technical hitch, with an estimated 800-1000 person audience. It was an incredible success, if the merch line post-concert was any indication! Aki and her staff worked incredibly hard and the end result was well worth the wait. Here’s to many more VOCAMERICA concerts in the future! Remember, if you want to see VOCAMERICA at a local convention in your area, contact that convention’s event staff and express your interest! 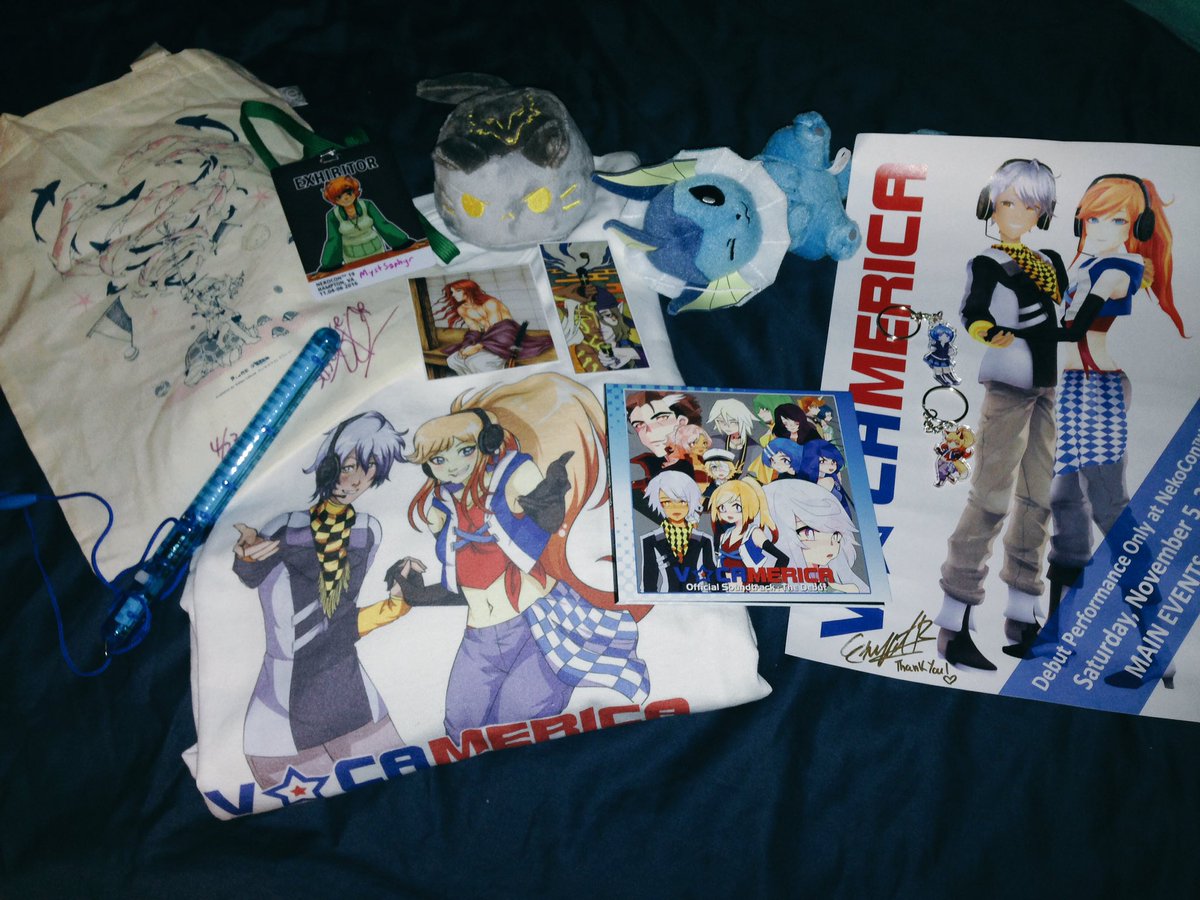 YoiStyle and AkiGlancy have revealed Aiko’s MMD model that will be used in the VOCAMERICA concerts!

The model will only be available privately and to those who purchased a high enough tier in the VOCAMERICA kickstarter.

Below is the life-size banner design that will eventually be ordered for the concerts!

I’m done with AWA and absolutely exhausted! A full write-up of the UTAU panel con stuff will come tomorrow. But for now, I’m pleased to be able to show off the finished cover artwork for the VOCAMERICA concert album, by the ever so talented Misha! I’ve already announced this on my social media outlets, but the VOCAMERICA Kickstarter is now live, and within a few hours of posting has already reached over $1000 out of its initial $5000 goal!

I’ve added a promotional widget for it on the sidebar! Even if you can’t donate, please give it a look and share! AkiGlancy/EmpathP and the VOCAMERICA team have all been working extremely hard these past few months, and deserve all the support they can get!

Aiko and I look forward to seeing you all at the debut concert this November 5th, at NekoCon in Hampton, VA!